Get yourself down to Pic A Flic (the best video store in Victoria) and check out the top 5 rental suggestions by local customer – ME!! 🙂 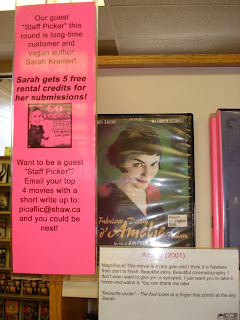 For those of you not in Victoria here are my write ups.

AMELIE – Magnifique! This movie is a rare gem and I think it is flawless from start to finish. Beautiful story. Beautiful cinematography. I donâ€™t even want to give you a synopsis. I just want you to take it home and watch it. You can thank me later.

*favourite quote* – The fool looks at a finger that points at the sky.

BABE – Another wonderful movie that I think is perfect from start to finish. Itâ€™s not often that a movie with a positive vegetarian/pro-animal message hits the silver screen.

A story about a little pig who is slated for slaughter but is saved at the last minute because of a moment of clarity and compassion by Farmer Hogett (played with quiet dignity by actor James Cromwell). The Farmer is so taken with the intelligence of Babe that he grooms him to become a prized sheepherder and hilarity ensues.

*trivia* James Cromwell was so moved by the story line of Babe that he became Vegan (someone who doesn’t eat any animal products) and is now an animal activist.

But rent it for the story as well – Mickey Rourke as John is breathtaking in this movie. Kimâ€™s ok too … but for me Mickeyâ€™s character pulls you in, has his way with you and leaves you panting – wanting more.

*favourite scene* The food scene where John feeds Elisabeth items from the fridge to the song Bread and Butter by The Newbeats. Classic. Fun to watch and in one short scene turned honey into a sex toy instead of something you put in your tea. BTW Honey is not vegan.

CORRINA, CORRINA – One of my favourite â€œrainy dayâ€ movies. While it might be easily passed off as a quaint family movie – there are some deeper issues explored in this movie such as racism, death of a parent and unconditional love.

For Mid-Century Modern freaks – the set and costume design in this movie is flawless. Lamps, cars, furniture, phones, plates, shoes from that era … itâ€™s all there and itâ€™s exciting to watch a period movie pay so much attention to tiny details.

Ray Liotta plays against type – as a loving father and jingle writer Manny Singer who is trying his best to deal with the death of his wife while he brings up his young daughter Molly (played to perfection by a young Tina Majorion). Molly has starts to act out in inappropriate ways after her mothers death and out of frustration Manny hires nanny Corrina Washington (Whoopi Goldburg) to help with the household duties left empty by his wife’s death. While Corrina and Manny start a flirtatious (and for the era – outrageous) love affair the movie really is about the love affair between Corrina and Molly. This movie is full of heart and will surprise you with itâ€™s lovely story.

*trivia* Don Ameche plays a small but pivotal role as Mollyâ€™s Grandfather. This movie was his last appearance on the silver screen before his death in 1993.

THE FILTH AND THE FURY – A fantastic documentary that is is a must see for anyone who is a fan of punk rock music. The movie chronicles the rise and fall of The Pistols through interviews with the surviving members of the band as well as archive footage and home-movies shot by director Julien Temple (who was friends with the band during their tumultuous short career). Temple gives us some historical context of what was happening in England before The Pistols were popular and why they rose out of the filth and fury to kick the ass of the mundane 70â€™s music scene.

A surprising moment in the film is the honest heartfelt regret and grief Johnny â€œRottenâ€ Lydon expresses over the untimely death of his friend and band-mate Sid Vicious and the anger he carries for how Sidâ€™s persona has been marketed, packaged and turned into a money making commodity.

This movie is not pretty to watch but neither were The Pistols. Itâ€™s a stark frank look at a group of kids (we forget that they were all in their late teens/early 20â€™s when they were at the height of their fame) who struggled to survive the roller-coaster ride of popularity they were on. Forget God Save The Queen. GOD SAVE THE PISTOLS!

*favourite quote* John Lydon: [remembering Glen Matlock] If you talk like an arsehole, and look like and arsehole, then you’re an arsehole.

0 Responses to Pic A Flic