Later in the evening Sho, Mo and I went to Fressen for dinner. I’ve been dying to go there for years, but for various reasons it’s never worked out. 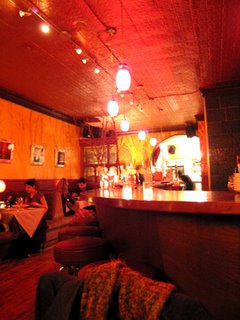 I did have a book party there back in Sept, but we didn’t eat anything off the menu.

Everyone kept telling me it was so expensive, but the entrees were all $15 and for a fancy meal like we had… that seemed pretty reasonable. The presentation and menu reminded me of when we went to Candle 79 in NYC.

I had the Grilled Portabelo Mushroom. Marinated and char-broiled mushroom steak served in a lemony pesto, aside grilled potatoes, seared greens and assorted vegetables. I had a slight allergic reaction to the food I was eating… I felt it as soon as I started eating it and it wasn’t until later when I read the menu on-line that I realized there was lemon in the sauce. I’m sensitive to citrus. 🙁 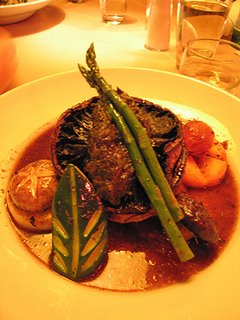 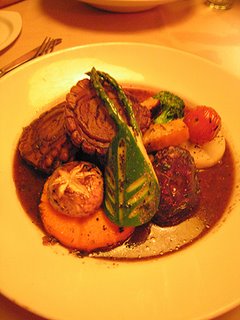 I can’t remember what Maury had (photo didn’t turn out) but it was some kind of yummy pasta.

Dessert was a trip and Sho and Mo dug into it and said it was great. I don’t do chocolate… but I had some mango. Yum. 🙂 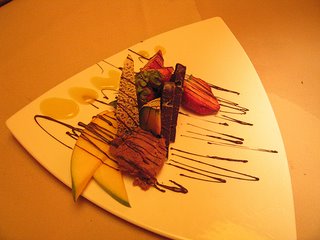 Then we went home and looked at the rough cut of the documentry Teresa Alfeld is working on about me… Then we went to bed.

In the morning I said my good-byes and headed to the airport… as you may have read in my earlier post I ended up hanging out in the Edmonton airport for an extra two hours. Sigh. Travelling is so exhausting.

So that was my trip…a good time was had by all. Especially me. : )

0 Responses to My trip to Toronto – day five – part two