X-mas Eve Gerry and I went for a walk with Fergus around 11:45pm. There wasn’t a soul out and about…

We passed by our local downtown video store and I noticed that the door was wide open. Hmmmmmm. They closed at 9pm. There wasn’t any lights on and there was no one inside. Hmmmmm. We didn’t know what to do. So we walked over to 7-11 and I asked to use the phone to call the alarm company that they had stickered on the window. No answer. Then we phoned the police station. No answer. Then we decided to call 911. I told the woman it wasn’t an emergency, but that I thought the video store had been broken into. She asked me if I had gone inside to see if there was a robbery. I’m like… um…. no. Why would I do that? I told her we looked in the windows and that it appeared that the store was empty but that the door was wide open. She said she’d “try” to send someone to come take a look. Ok. *laugh*

So I walked outside and Gerry said “Let’s get out of here.” Poor Gerry. I guess while I had been inside talking to the cops on the phone, the scuzzy creepy people that hang out at 7-11 late at night were throwing pennies at him and calling him a rat and a snitch because I was calling the cops. Poor Gerry. I felt so bad that he was hassled.

The next day we woke up late. Had waffles and soy sausages for breaky and then went for a nice long walk down to dog park on Dallas Road. On the way we bumped into the biggest cat I’ve ever seen. 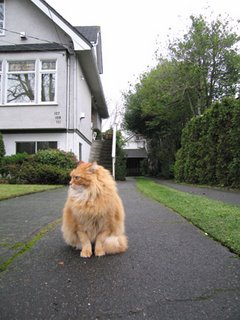 She was NOT scared of Fergus at all and even walked towards him all puffed up and ready for a fight like a drunk rocker dude at a bar. “Wassup?” It was too funny.

The park was full of people and dogs and Fergus ran around like a crazy person. 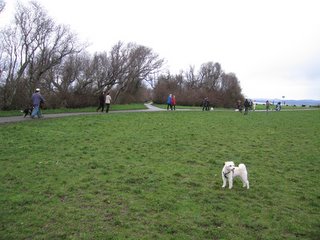 Ooooh. Is Fergus cold?? Time for a hoodie!! 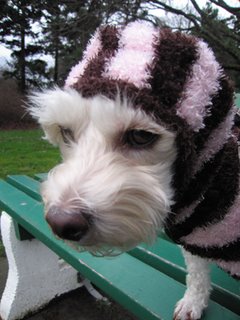 Whew. I’m pooped from all this walking… let’s chill-ax. 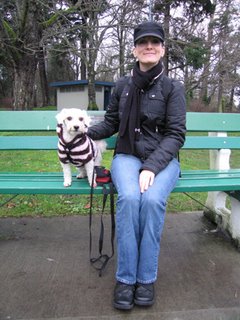 STOP crushing me with your looming giant head!! 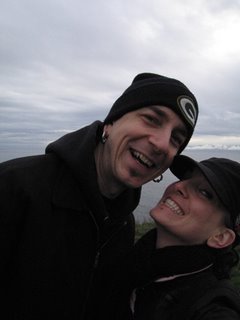 Ahhhh the beach. Cloudy, cold and lovely. How lucky am I to have all this just a few blocks from my house?? 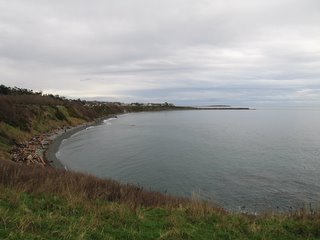 Now I’m sitting at the Tattoo Shop waiting for customers to come and and help me with this giant amount of boredom I’m dealing with… sigh…I’d rather be shopping.