Vancouver was a lot of fun. I was supposed to drive over with my Auntie Bonnie but plans got changed at the last minute and I went over to the big city on my own.

It’s funny how I used to be so afraid of Vancouver… I thought it was so huge and hard to get around. Now that I have my drivers license (I took my test when I turned 33 — I’m kind of a late bloomer) the world just gets smaller and more accessible.

I bopped into the big city in my trusty smart car and headed to my parents house. I settled in, brushed my teeth and my Dad and I headed downtown to pick up my step-mum for dinner. We went to a Lebanese place called Habibi’s. Almost the entire menu was vegan… There was lamb, chicken and yogurt and some cheese on the menu but for the most part I could have eaten the majority of everything. Weeee! I was very pleased. The food was excellent but the music was so loud that it made it hard to concentrate. We asked for them to turn it down and the waitress looked scared. She said “the chef likes it loud… but I’ll see what he says.” The music was turned down (barely) but 2 songs later it was back up to ear splitting level. The food was very good… but the atmosphere was lacking. TURN THAT DAMN MUSIC DOWN! 😉

Went to bed early so I could be fresh for the demo the next day. Woke up. Went for a hike and had oatmeal with my parents. My Dad makes the best steel cut oatmeal on the planet.

Drove to the demo and set up. 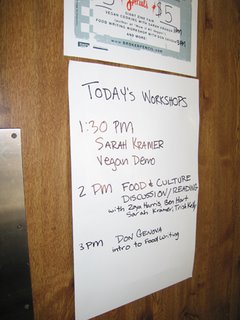 Hung out with some really great people and got down to the demo. I haven’t done a demo in a long while (sorry people who came to see me). I don’t think it was bad… but it wasn’t my best. 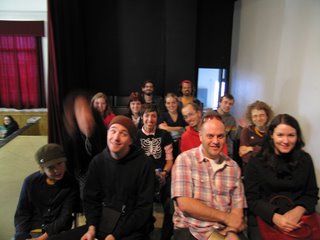 I then sold some books and signed some autographs and got to visit with some of my favourite fans. I love you Evan! 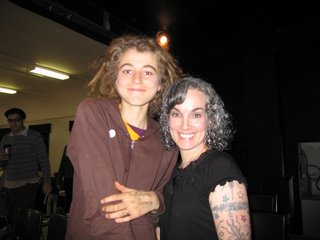 I then sat on a panel with other food writers and talked about food & culture. I didn’t know I had to “read” something so I chose the passage from LDV called Girl of 100 Lists (which is the title of a Go-Go’s song).

When I got to the end of the passage about when Gerry reaches over and tells me “there’s your extra love.” I started to cry. I was so embarrassed. I’m not a good crier. I think I blushed 10 000 shades but Trish Kelly (one of the organizers of the event) reached over and squeezed my arm and that made me feel a little better.

I hate crying in front of people. Why?
I’m not a robot. There’s nothing wrong with being vulnerable. Jeez Sarah.

Anyway. Hung out for a while and visited each table. There are some really great zines out there and I met some fantastic people.

I headed back to my parents place, but not before hitting Whole Foods. Bought a basket full of Vegan Cheese (not easy to come by in Victoria). My parents were out at a dinner party so I lay in their bed and watched Charlies Angels on cable. I felt like a little kid laying in their room watching tv. Funny how being around family can make you digress.

The next day I had a lovely breakfast with my parents (oatmeal again… weeee!) and then my Dad took me for a ride in Lance. Lance is their new speedy sports car that they are very excited about. Lance is one serious hunk of a car… let me tell you.

I packed my stuff, hugged my parents and headed to Science World to catch The Body Works exhibit I’ve been hearing so much about. Wow… what a nutty exhibit. Dead bodies. Lots of them. It was really cool and kind of disturbing, especially the guy that was totally skinned but he was holding his skin up in one hand. Did you know that your skin is the heaviest organ? Me neither!

I hit the road and headed out to Ikea but read the map wrong and ended up at the ferry. DAMN! That’s ok. I needed to get home. I miss my boys.

I missed the 5pm ferry by 2 minutes so I had to sit for 2 hours and wait for the 7pm to arrive. DAMN IT! Luckily I had just purchased the new K-os cd so I listened to that a few times…. it’s a great cd.

Got home around 9:30. Walked the dog and crashed into bed with my two favourite men. What a whirlwind weekend.

Thanks Vancouver!
Hope to see you soon.