Woo hoo!
My photo was used in Monday Magazine in conjunction with an article about The Capital City Cheesecake show this Sunday at Lucky Bar. 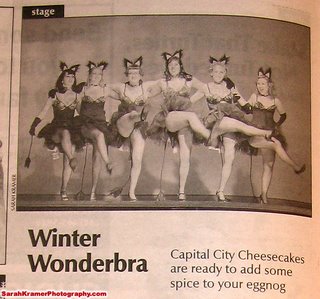 The 12 days of Christmas countdown has finally begun, and for many that means itâ€™s time to stock the larder full of sugary goodies. But the Capital City Cheesecakes are offering up a holiday season treat of a different kind, complete with tarts and pastries . . .well, make that â€œpastriesâ€ minus the â€œrâ€.

The local burlesque troupe has been a vital part of the burlesque revival that has been gaining momentum over the past few years. While this incarnation is fairly newâ€”their debut group performance was in Julyâ€”many of the girls have been interested in burlesque for much longer than that.

Champagne Sparkles, one of the Cheesecake performers, has only been doing burlesque shows since February, when a workshop for a friendâ€™s birthday finally introduced her to the nuts and bolts of the sassy stripping art. But she says sheâ€™s been intrigued by the movement for quite some time, and it was watching a Vancouver performance by famed adult dancer Catherine Dâ€™Lish that put her over the edge.

â€œSheâ€™s just this amazing performer. The costumes, the sparkle . . . thatâ€™s what hooked me, thatâ€™s what made me decide I had to do it,â€ she says.

Sparkles says the troupe has about 20 people loosely affiliated with it, but there are about six to eight core performers and half a dozen supporting performers. The women involved span a wide range of ages and occupations.

â€œItâ€™s so broad. We have everything from professionals to moms to students and everything in between. All ages, all shapes and sizes,â€ she says. â€œWhat I think is common with all of us is a desire to really entertain and perform and to put on a good show and obviously a sense of being comfortable with your body.â€

For the Cheesecakes, burlesque is about more than showing off their pasties. Their mission is â€œto celebrate classic burlesque with a modern twist,â€ meaning they incorporate humour, audience participation, and a whole lot of sass into their shows. But at the end of the day, the girls are showing off their boobies, which could potentially make for a bad day at the office if you run into someone you recognize.

â€œThere is a level of that, but obviously if youâ€™re going to be onstage you have to expect that youâ€™re going to be recognized and be prepared for that. Itâ€™s not something any of us are ashamed of doing. Itâ€™s all about celebration,â€ says Sparkles. â€œIâ€™m a professional and Iâ€™ve never had a bad reaction from anyone I work with about what Iâ€™m doing.â€

Indeed, many of the performers are more worried about an onstage slip-up than an embarrassing post-show run-in. Sparkles has her share of funny show stories, such as when the CD started skipping during her first-ever performance.

â€œIt prepared me for the fact that something goes wrong at every show,â€ she laughs. â€œI have yet to come a pasty come flying off, but that definitely happens to everyone at some point. The ability to dance with one hand covering your breast is a skill every performer needs to learn.â€