Fergus is getting quirky in his old age … lately if we’re watching a movie and an elevator bell ‘dings’ he shoots up like a bat out of hell. Why? We’ve never lived in a building with an elevator that ‘dings’.

School Bells make him shiver like a Chihuahua … but that’s my fault. I left him at home once when they were testing the buildings fire-bells (I had forgotten they were testing) and the bells were ringing on and off for about 4 hours and I came home to find a quivery dog under the bed. I feel really bad about that.

Or how about the fact that he will run and hide if someone is blowing bubbles. That’s Gerry’s fault, we were playing with bubbles when Fergus was a puppy and he (Fergus that is) was jumping up and down and biting at them. So cute, until Gerry knocked a photo frame off the wall and scared Fergus. Now bubbles = scary.

Lately Fergus has been joining me in the bathroom when I get ready in the morning. Last week he quietly woofed at the closed door until I let him inside and he lay on the bathroom mat. Yesterday he put his paws up on the tub and watched me shave my legs.

Today he rubbed his paws on the door of the bathroom vanity so I opened the cupboard for him and he climbed inside and curled up for a nap. 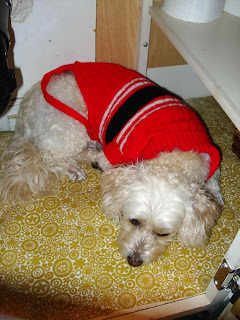 He also likes to lick my feet. Enjoys the spine of Kale but not the leaf and when we come home from a walk at night will stand in the hallway and won’t come into the apartment until one of us invites him in… maybe he’s a vampire … I love Fergus!