Day from hell.
Maybe not a day from hell… but a hella long day. Thatâ€™s for sure. Woke up early. Felt great… had a good nights sleep. My leg still hurts like hell. I can hardly walk on it and going up and down stairs is impossible. I can see a bruise coming up, but I think the Arnica is helping. I had a nice breakfast got to the airport early. Used the internet, caught up on some e-mails. Got onto my plane… .sat on the tarmac for 40 minutes. HELLO? Is anyone going to update us?? FINALLY the captain comes on and tell us there is a glitch and they are going to fix it. 20 minutes later… the glitch canâ€™t be fixed so we have to get off the plane and get a new one.

Thank GOD I was in the 4th row… so I only had to wait about 20 minutes for them to reschedule my flight. So they got me on the 3pm flight. Yay. Iâ€™ll be in TO by 11pm.

Iâ€™m bummed cause I am missing out on Shoshanaâ€™s birthday dinner… but at least Iâ€™ll be there for dessert.

They gave me a lunch voucher and I headed upstairs to the cafÃ© with dread in my heart. WTF are they going to have up there? Well… they had a lot of nothing Vegan. I asked the dude if he could make me a vegetable sandwich with whatever veggie they had. He laughed at me and asked me why? I explained I was a strict vegetarian… so this is what I got. 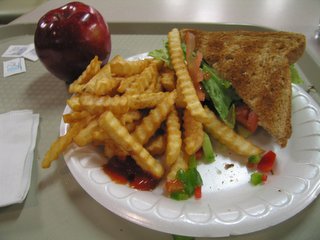 They also had a little store beside the cafÃ© that had hand-crafted items by Saskatchewan artists. Nice stuff. I bought a pretty pair of earrings by Megan J. Hazel (no website…wassup with that?). Saskatchewan is rich with artists… I rag on this city a lot… but itâ€™s a pretty cool. For Regina. *laugh* Now Iâ€™m wishing I had more time here so I could do some more exploring…

Internal Dialog: What am I saying? Donâ€™t wish that!!

So I sat at my gate and thank GOD the airport has wireless internet. 3pm rolled around and they made an announcement for everyone on my new flight to come back down to the ticket counter (insert scary music here).

My flight was cancelled. Again. Next flight? Tomorrow. Ugh.
So they gave me more vouchers and sent me to the Travel Lodge in the South End. My old stomping grounds. 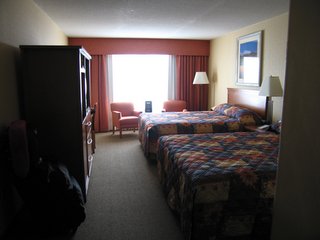 My hotel looks over the parking lot and I am RIGHT beside the Burger King that I used to hang out at. My room smells like burning animal flesh.

I called my Dad and met him to go for dinner. We hit a lovely restaurant called Michi and they even had little tiny carrot icons beside everything that was veggie/vegan friendly. Thatâ€™s more like it! My food was good and I was SO hungry I forgot to take a photo… 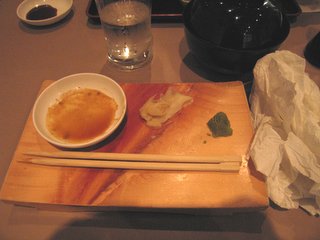 I was going to see my Dadâ€™s play again, but Iâ€™m so wiped that I decided to head back to the hotel and sleep. Hugged my dear old Paw-paw and headed to the mall to call a cab.

The Cornwall Center (or Corn-hole as we used to call it) was my hang. When I wasnâ€™t at the theater, I was in the corn-hole hanging out with my peeps. The mall is exactly the same. *laugh* I guess malls donâ€™t change much. 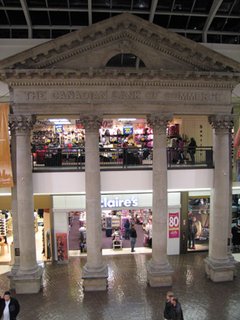 This is where me and my peeps would hang out and make fun of people and smoke cigarettes (smoking is bad. Donâ€™t do it) and stare at boys and wished we were pretty like all the skinny blonde girls (we were, we just had no confidence) and just hang out 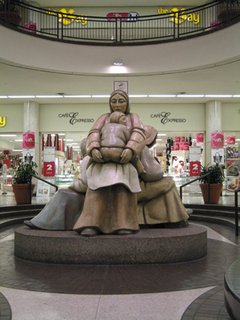 Had a cup of tea in the hotel and met the restaurant manager, Brisden. Who used to be Veggie and ran a veggie restaurant in BC before he moved here to be with his daughter. Nice dude. Heâ€™s gonna make me a special breakfast tomorrow. Ya for VFPâ€™s!!! ( Veggie Friendly Peeps).

So Iâ€™m off to the airport. Bad things always happen to me in threes. I hurt my leg. The plane ride was cancelled. Letâ€™s hope the lucky penny I found on the road will keep me safe.